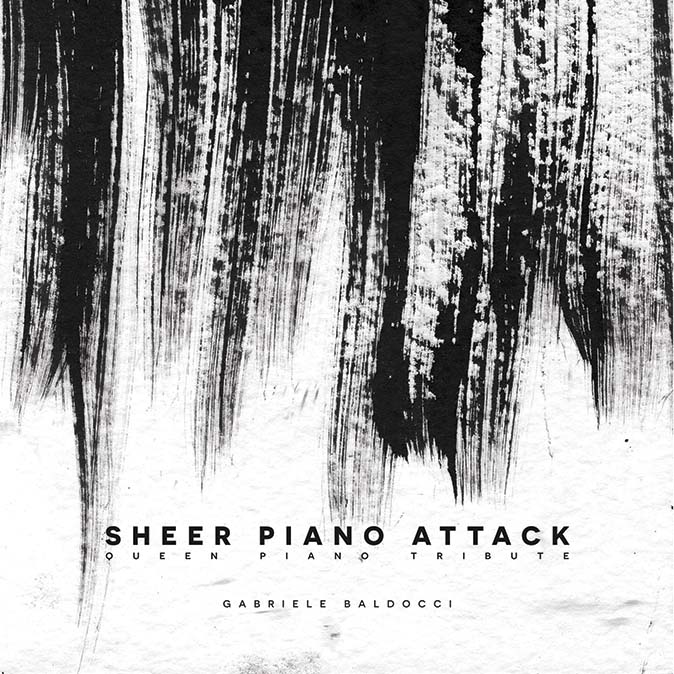 The story behind this album is quite special.
Although I am a classical pianist, I have always been a huge Queen fan, since I was a child.

Sheer Piano Attack is one of my dearest projects, in which I have managed to combine my passion for Queen with my classical training.
Since a few years, I have been recording and performing Beethoven’s complete Symphonies transcribed by Franz Liszt for piano solo and I became heavily influenced by Liszt’s improvisational Liszt borrowed the themes of many masterpieces of his times to produce amazingly virtuosic paraphrases and transcriptions for the piano.

The idea behind Sheer Piano Attack originated from the following question: what would have Liszt written if he lived in our times and if he was, like myself, inspired by the works of Freddie and Brian? Starting from that idea, I composed a few tracks (White Queen, Keep Yourself Alive, Love of my Life, Save me / We are the Champions / Don’t Stop Me Now Medley, You Take My Breath Away) on the style of Liszt.
Then I called a few composer friends and I told them to write whatever they wanted, with the only rule of taking a particular song as a source of inspiration. They all wrote very different things.
Simone Spagnolo’s Innuendo is a faithful transcription of the original, whereas Michael Glenn Williams’ version of Bohemian Rhapsody is a crazy (and terribly difficult!) mix between Bo Rhap and Liszt’s Second Hungarian Rhapsody. Marco Nodari, finally, wrote “The Prophet”, based on “Prophet’s Song”, one of my favourite Queen tracks, which he completely revisited while maintaining the impressionistic atmosphere of the original song.
Finally, I have contacted Peter Jones, a fantastic singer from Nottingham, whose voice I particularly love, to deliver a touching version of “Too Much Love Will Kill You” and “Is this the world we created?” as well as a couple of tracks from “Barcelona” together with the amazing Italian soprano Barbara Luccini.

The realisation of this album took many years, for reasons too hard to be explained here. I am much in debt with all the people who contributed to its existence during the crowdfunding campaign. Without them, this album simply would not exist.

Finally, an immense thanks to my incredible wife Nagore Alzola for supporting me in everything I do, to my parents Massimo and Daniela for having been the best parents one son could ever desire, to my Spanish family (Victoria Ortíz de Zárate, Juan Pedro Alzola, Ainara Alzola and Christian Schmauser) for having “adopted” me in the most caring way and to my friend Barbara Luccini for being the sister I never had.

In loving memory of Juan Antonio Viana Alzola, who contributed to this album but sadly left us way too soon to give me a chance to play this music for him.

Dedicated to Brian May, to whom I owe much of the enthusiasm and the inspiration that made me a professional musician.